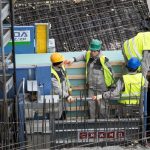 The number of migrants arriving to work in Lithuania this year has increased more than in two times due to the Ukrainians. It was reported by Delfi with reference to data of Migration Department of Lithuania. According to data of this institution for the first quarter of this year the foreigners were issued almost 16 900 visas and residence permissions. It is mentioned that the number of arrived in 2017 is almost doubled. In the course of four months of the last year more than 7 thousand foreigners came to Lithuania. In the course of the first quarter 11.3 ths Ukrainians arrived, and in 2017 – almost 3.6 ths. In capacity of reaction to growing labour migration the government has announced a plan on quota introduction for some professions for unqualified workers from abroad. The specific proposals will be represented in spring.