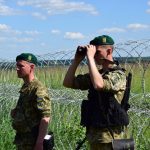 The foreigners were found during the inspection of the vehicle, which was moving to the border near the village of Zavosyne, Velykyi Bereznyi District. Both Azerbaijanis had only copies of their foreign passports. Ukrainian citizen, driving the car, was also detained.

So far, the participation of 37-year-old Ukrainian in the possible illegal transportation of foreigners across the state border is being established. Azerbaijanis are delivered to Velykyi Bereznyi Police Station. After their identification, they will be brought to administrative responsibility under article 202 of the Administrative Code “Violation of the border regime, regime at the checkpoints across the state border of Ukraine or regime rules at entry and exit checkpoints”.