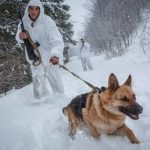 One of them, according to his words was a citizen of India, being detained in Uzhhorod district, Transcarpathian region. The appearance of the unknown person in the border area was reported to the border guards by local residents. To verify this information, a response team immediately started to the place. Soon the man was found. He had his personal stuff and driver’s license. Currently, the foreigner is taken to the border unit to confirm the identity and establish the circumstances of his stay near the border. He can be called to responsibility for violation of the border regime and attempt of illegal crossing of the state border of Ukraine.

Two more offenders by warning shots were detained by the border guards of Belgorod-Dnistrovskyi Detachment near the village of Mayaky. Unknown were found near the border on the bank of the Dniester river. These persons didn’t react to the lawful requirement of the border guards to stop and tried to disappear. However, after warning shots they finally stopped. The detainees had no any documents, but called themselves to be the citizens of Moldova. 53 and 18-year-old foreigners reported that allegedly crossed the river by boat. So far, the detainees are brought to the Department for clarification of all circumstances of the offense and drawing up administrative and procedural documents. Their fate will be determined by the court.