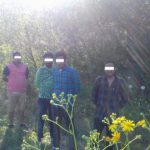 Unfamiliar violators were detained 300 m before the state border by Transcarpathian border guards. These were four illegal migrants moving towards the border. Border guards detected them nearby the village of Lypove, Beregovo district. The reaction group started immediately to the place stopped these persons 300 m before the state border. Detained men had no any documents, however they introduced themselves as citizens of India. They travelled to one of EU countries. All detainees were delivered to Border Service Department “Goronglab”. So far, border guards establish the circumstances of the infringement and a circle of persons involved in foreigners’ transportation over the border.