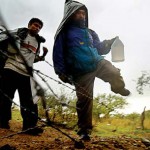 The staff of State Border Guard Service apprehended 3 citizens of India while they were attempting to cross the state border on Hungary in Transcarpathian region. In the course of operative information realization the border guards prevented the attempt of three illegal migrants from India to cross the state border in illegal way. It is marked that detainees had no any documents. They introduced themselves as the citizens of India. They planned to reach the countries of European Union. According to the statement, the detained persons were delivered to BS “Vilok”. The measures are undertaken to establish the persons involved in organization of illegal cross of the state border.