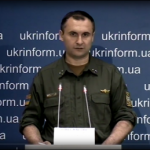 Active phase of operation “Border-2016” continues, which is performed by State Border Guard Service together with other law enforcement agents and other concerned ministries and departments. The operation is actually performed within the entire territory of the country. It includes reinforcement of control in the border areas, planning a series of other actions referring to counteraction of threats in the sphere of fight against the crossings of the illegal migrants through the state border as well as excisable goods, contraband of drugs and weapon.

As it was informed at the briefing the head of State Border Guard Service – press secretary Oleg Slobodyan – during the realization of the program “Border-2016” started in April, 1031 violators were already detained at the state border, more than 2400 violators of the border regime and almost 167 illegal migrants.