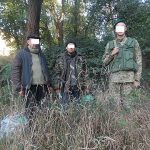 Border guards of Chop Border Detachment detained three men intending to cross illegally the state border and get to the countries of European Union. In the course of planned measures realization border guards discovered and detained two persons. They attempted to get to Slovakia. The violators did not have any document, however, explained that they were the citizens of Ukraine, 1975 and 1963 DOB, residing in Donetsk region.

One more violator was apprehended by the border guards of BS “Palad Komarovtsy”. Receiving information from Slovakian colleagues about unfamiliar person moving towards the border, they immediately started the operation in closing state border line. In a result, a citizen of Moldova was detained 10 m before the state border. The man had national passport, however, he refused to provide any explanations.

So far, all detainees are delivered to Temporary Detention Centre of Chop Border Detachment aiming to establish circumstances of the infringement and drawing up corresponding procedural documents.