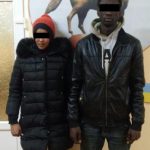 The staff of Mukachevo Detachment detained two illegal migrants from Africa. Unfamiliar person was noticed during border patrolling in the area of BS “Luzhanka”. He attempted to get over the barrage fence. Border guards made a warning shot up in order to stop the violator. Besides, in the course of further searching action the law enforcers found and detained a woman close to the apprehension place. Detainees did not have any documents. The man reported to be the citizen of Mali, and woman – from Somalia. Also, the travelers told that the aim of their trip was to improve their life conditions in one of the countries of European Union. So far, the detainees are delivered to Border Guard Department. The court will determine their destiny.