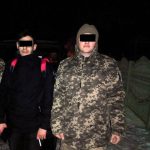 Just opened Contact Centre “Zahon” at the border on Hungary has already given positive results in securing the general area of the state border. Only for a day, illegal migrants were detained due to operative exchange of information between border guards of Ukraine and Hungary through this Contact Centre. The trespassers were the citizens of Morocco. One of them was apprehended by the border guards of BD “Luzhanka”, Mukachevo Detachment at night together with the operative staff of the Department. The foreigner had residence certificate of Ukraine and, except his passport, one more document for another citizen of Morocco. The other fellow traveler fled in direction towards Hungarian border. Ukrainian border guards organized immediately this information exchange with Hungarian law enforcers and gathered reserves to protect direction. Soon, the Hungarian border guards detained the violator on their territory, who was detected due to received information in advance.