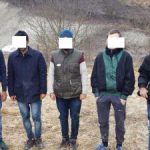 Four citizens of India and two from RF, crossing Ukrainian-Russian border, were stopped by the  border guards of BD “Starytsya”, Kharkiv Detachment, together with the representatives of Department on Fight against Human Traffic and National Police. The trespassers were detected and detained in the direction of Russian settlement Mur and Ukrainian one Starytsya. There were four citizens of India and two Russian citizens, who agreed to take foreigners over the Ukrainian-Russian border for a reward in amount of $ 2 000. Also, according to the words of illegal migrants it was managed to learn that they arrived to the Russian federation in legal way, as tourists, and then they planned to get to Europe by transit through Ukraine. Currently, the violators, the citizens of India and RF, are detained.