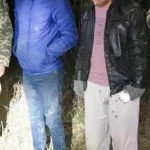 Two illegal migrants intending to get illegally over the border to Hungary were detained at night by the border guards of BD “Luzhanka”, Mukachevo Detachment, in Transcarpathia. Border detail noticed two unknown persons moving towards the state border  by means of night vision device at midnight. The foreigners were stopped 50 meters before the border, which overcoming the barrage fence attempted to cross Ukrainian-Hungarian border. So far, the protocols on administrative infringement are drawn up and foreigners are delivered to BD “Luzhanka” for undergoing filtration measures. Actions are taken as to establishing the circle of persons involved in organization of illegal migrants’ unlawful trip. Further destiny of the travelers will be defined by the court.