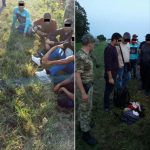 The General Interagency Group of border guards and staff of National Police stopped unlawful cross of the state border by the group of illegal migrants from India in the framework of joint special operation “Border-2017” in Transcarpathia. In the course of available operative information check, the law enforcement agents stopped the car of Polish registration driven by Ukrainian citizen. There were also 5 men of the age 20-31 years old in the car, all of them had passports of the citizens of India. During the interview the foreigners informed that they planned to get to one of the countries of European Union. Also law enforcers learned that assisted by Ukrainian, illegal migrants planed to cross the state border beyond the check point “Kosyno” at the border on Hungary. Aiming to perform filtration actions and prepare administrative documents, the foreigners were delivered to the Temporary Detention Facility of Mukachevo Border Detachment. The Ukrainian undergone measures on presence the signs of criminal offence in his actions, which is stipulated by Part 2 article 332 of Crime Code of Ukraine (Illegal transportation of persons over the state border of Ukraine). The legal estimate of foreigners’ actions and their smuggler will be performed by the court.