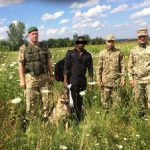 The servicemen of Mostytskyi Detachment prevented illegal cross of the border by the citizen of India close to Ukrainian-Polish border. Local resident informed about appearance of the unknown person of Asian appearance to the border guards of BD “Shegeni”. He saw the foreigner in the suburb of one of the border villages. Reaction group arrived to the place immediately and started the searching operation. The foreigner was detected 200 m before the state border on Poland. He was the citizen of India, 1991 year of birth, who since 2016 had been the student of one of Ukrainian higher establishments. Entering the educational institution Indian decided to look for better destiny in the countries of European Union, thus, walking beyond the check point he got through to Poland. Decision on the case as to illegal cross of the state border of Ukraine will be made by the court.