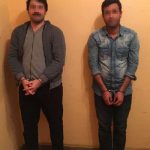 Two illegal migrants trying to get over the border to Hungary to reach the European Union were apprehended in the evening by the border guards of Mukachevo detachment. When patrolling the border detail noticed two men attempting to overcome the barrage fence. The border guards detained unknown persons 40 m before the border. The men had passport of the citizens of Turkey. The foreigners were delivered to Border Department “Vilok” in order to draw up administrative protocols and perform filtration measures. The actions on establishment of persons’ circle involved in the organization of illegal migrant’s trip still continue. The legal evaluation of the illegal migrants’ actions will be performed by the court.