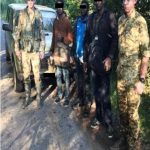 The border guards of BD “Goronglab”, Mukachevo Detachment received information from Hungarian colleagues about appearance of unfamiliar persons near the border. In a result of searching actions three persons were detained – two citizens of Sudan and one from Somalia. The men aged 27, 28 and 37 walking to Ukrainian-Hungarian border were apprehended in the suburb of the village Shom. The illegal migrants had only certificates on application for protection in Ukraine.

During verification the border guards established that the detainees had resided lately in Uzhhorod, however they did not plan to stay in Ukraine and intended to get illegally to one of the countries of European Union. The foreigners were delivered to Border Department in order to draw up the protocols for administrative offence. The actions continue on establishment of possible circles of persons involved in organization of the migrants’ illegal trip. Their further destiny and evaluation of their actions will be determined by the court.