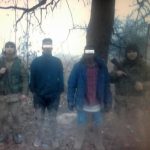 During the filtration measures it turned out that one of the foreigners of was detained by the border guards of Mukachevo Detachment detained two months ago.

The protocols on administrative offenses were drawn up as to the detainees. Currently, the circle of persons is established, which involved in the organization of the illegal immigrants’ trip.