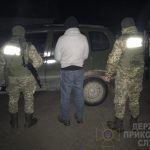 Thus, during the monitoring of the state border, on the outskirts of the village of Nyzhankovychi, the border guards of BU “Smilnytsya” noticed a suspicious person. The man, YOB 1991, was without documents and had only a photocopy of his passport. Later, it turned out that he came to Ukraine last year from Egypt, lived and worked legally for some time, but decided to look for a better life in the West.

And 38-year-old Ukrainian woman, a resident of Vinnytsia region, made her way to Chisinau through the checkpoint “Kuchurgan”. Entering the territory of the checkpoint, she tried to cross the border ot he neighboring county hiding from the border guards. But her intentions failed. It turned out that the offender had an internal passport of the Ukrainian citizen (ID-card), which did not give her the right to cross the border. Probably, knowing that Ukrainian woman decided to act in this way.

In both cases the detainees are brought to administrative responsibility for attempt to cross illegally the state border of Ukraine, the court will make further decision on their cases.