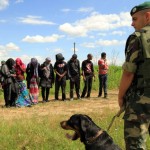 The staff of State Border Guard Service detained the citizens of Vietnam in the area of BS “Vilok” in Transcarpathian region. The district inspector received information about the violators. The reaction group started immediately to the place. Some time later, border guards apprehended 6 citizens of Vietnam in the suburb of the settlement of Novoe Selo, who were 2 km before the border line in the corn field. The men did not have any documents at all. According to the words of the detainees they planned to get to the EU countries. Also, they confessed that the organizers of illegal smuggling beat them many times and physically humiliated them during their trip.

It happened because of the absence of money that Vietnamese citizens had to pay for their journey.After the next humiliation the men managed to escape. In the place where they were detained by the border guards , Vietnamese made plans as to their further route and hided from their pursuers .