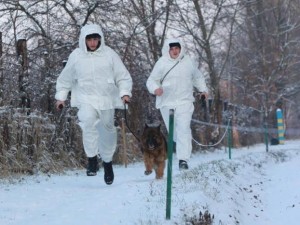 Lately, border guards of Chop Detachment apprehended the next “happiness seeker” for the attempt to cross the border illegally. When the alarm system went off some meters before Ukrainian-Slovakian border, border guards of BS “Velykyi Bereznyi” detained a man without any documents. “Tourist” stated that he was Syrian. According to words of the detainee it was established that he had lived and worked for some years in Luhansk region, then he decided to leave Ukraine and used the service Google maps to get to Norway.

Afterwards, the border guards managed to find out that this citizen was already detained in 2014 by the staff of Chop Detachment within Uzhgorod district for the same violation.

Aiming at clearing the circumstances of the violation and preparing administrative and procedural documents, the violator was delivered to Border Subdivision.

Detainee’s further destiny will be defined by the court.