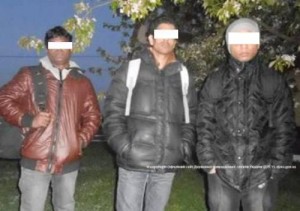 Border guards of Chop Detachment apprehended a group of illegal migrants from Southern-Eastern Asia. The border guards of BS “Salovka” prevented the trip of the “guests”. Receiving preliminary information from local inhabitants about possible hiding of illegal migrants in the neglected premise of the non-residing house, the border guards detected three persons nearby the state border. As it was established later on. two of them were citizens of Bangladesh, one – from Sri Lanka.

In a result of further conducted actions directed upon identification of persons participated in smuggling of above mentioned persons in the area of BS “Salovka”, border guards together with SSU officers established that the place of their previous location was in Uzhgorod. Checking it, the law enforcement agents detected four more citizens of Vietnam without documents.

Also, the border guards of BS “Goronglab” of Muakchevo detachment detained 5 citizens of Georgia. The men were walking avoiding the check point and intended t get to the countries of European Union. The violators of the state border were delivered to border subdivision. The  conditions of the violation are verified and administrative and procedural documents are processed.