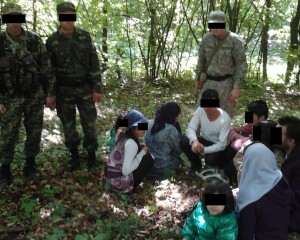 In the frames of operation on counteraction to illegal migration Chop border guards detained a group of unfamiliar persons intending cross the border and to get to Slovakia in illegal way. Nine persons of Asian appearance were detected and detained by the border guards while patrolling the area of BS “Velykyi Bereznyi”. In a result, during the locality investigation with assistance of the service dog, the border guards detained two more unknown persons. As of one the detainees explained, all of them are the family, migrants from Afghanistan, however, no any documents they had. There were five adults and 6 minors in the family, of them three children of the age 7 years. According to the words of the detainees they paid the unfamiliar persons $20000 for the trip. Yet, the smugglers had to get $30000 after the family would reach Slovakia.