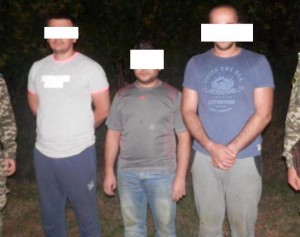 State Border Guard Service in Transcarpathia together with other law enforcement agents and Border Departments of EU countries continue the complex of actions on counteraction to illegal migration in the frames of operation “Border-2015”.

In the course of operative searches border guards of BS “Kosyno” of Mukachevo Detachment detained three citizens of Syria intending to get to EU in illegal way.

One more group of unfamiliar persons were noticed by the border guards of the same detachment at a sufficient distance from the observing tower by means of the thermal imager, and informed the Hungarian border guards on this point.

Soon due to provided information the Hungarian border guards apprehended some more illegal migrants on its territory.

In the morning continuing the searches of the trespassers in the direction of Ukrainian-Hungarian border, Ukrainian border guards detained one more group of Africans. They also travelled to Hungary.

Four detainees were the natives of Republic of Chad, one – from Sudan.