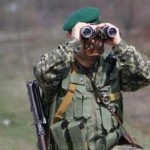 A big group of illegal migrants was apprehended by the staff of State Border Guard Service in Transcarpathia in a result of complex measures on counteraction to unlawful activity at the state border.

Border detail of BS “Vilok” of Mukachevo Detachment, staying nearby, caught the violators some meters before Ukrainian-Hungarian border. In the course of inspection the travelers reported that all of them were from Afghanistan. They had no any documents. Altogether, 13 persons made their way to Hungary – 2 men, 3 women and 8 children.

It should be marked that three children were very small.

So far, Afghanis are delivered to Border Subdivision, where except establishing all circumstances of the infringement they were given to drink hot tea and rendered first medical aid. Besides, a circle of persons is under establishment, who are involved in their illegal transportation and dangerous “trip”.

It will be marked that organizers of illegal migration try to get rid of the migrants as soon as possible. Thus, they do not consider the warnings that similar trips in the mountainous locality may lead to death of migrants, especially little children.
Source