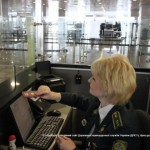 The border guards of Lviv Detachment “Lviv-airport” discovered a citizen of Sierra Leone with fake passport in the checkpoint.

The woman arrived from Istanbul to Lviv showed her passport at passport control. However, the inspector of Border Guard Service had suspicions about the authenticity of this document. In the course of detailed passport examination the  border guards noticed the lack of watermarks at information page and traces of its mechanical damage and other signs of forgery.

Police was informed on this point. Citizen of Sierra Leone was rejected in crossing the state border of Ukraine. Violator will be returned by a back flight.