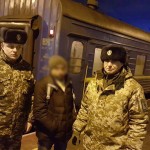 The staff of Operational Search Sub-departments of Mukachevo and Odessa Border Detachments of SBGS in cooperation with the representatives of Interior Security Department of National Police apprehended the citizen of Pakistan being under suspicion in organization of smuggling channel through the state border of Ukraine in the area of Transcarpathian region.

The Pakistani was disclosed in the course of operative action as he was hiding from the Prejudicial Inquiry Bodies. As to the obtained operative data the foreigner is involved in at least three illegal transportations of the migrants to Hungary and Romania. The detainee will be handed for further investigative actions to competent authorities.