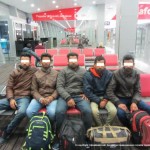 Five citizens of India arrived from Bangkok were stopped by the border guards of Separate Check Point “Kyiv” in the Boryspil Airport. While checking transit passengers travelling through Milan to Casablanca, these citizens presented the passports of the sailors, which were false. Besides, they had warranty letters, court decisions, which were just color Xerox copies. Also, the “sailors” had one more set of the passports – of the citizens of Palau Republic. Thede documents were also forged. The violators will be returned by the next fly back to Bangkok.