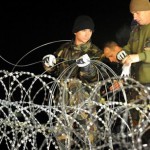 Rather less number of migrants arrives to Hungary then in Austria, but the quantitative growth of those overcoming the frontier obstacles provokes anxiety of Hungarian authorities.  Hungarian police report that more migrants succeed to cross the barrier of barbed wire erected along the border on Serbia. In January, 550 migrants were detected at the Hungarian side of the border. For the first 20 days their number succeeded 1 200.

Hungary constructed this barrier 4 meters high in September 2015 in order to stop uncontrolled flow of migrants through the southern borders of European Union. This step was subject to criticism on the part of international community. Since then, six EU countries made a decision to strengthen their borders. According to Hungarian Police, more and more migrants succeed either to cut the barbed wire or get over it. The majority of them were the citizens of Pakistan, Iran and Morocco, who were unable to claim refugee status granting in European Union. Persons crossing the Hungarian border in illegal way are threatened with prison confinement or deportation. In 2015 about million migrants arrived to EU.