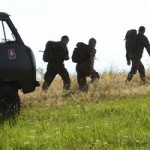 Border guards of BS “Luzhanka” of Mukachevo Detachment detained two migrants from Syria, who were looking for better destiny in one of EU countries. Information about suspicious persons was received by the border guards from the person intending to cross the border. in particular, the man reported the law enforcement agents that he made his way to the check point “Luzhanka” and watched persons moving towards the state border.

In a result of received data realization two persons were apprehended. They had no any documents. In the course of conducted filtration actions they introduced themselves as the citizens of Syria. Also, one of the detainees has been residing in Ukraine for almost 11 years, and decided to try getting to one the countries of European Union. So far, detainees are delivered to detention centre, their further destiny will be determined by the court.