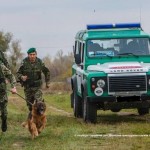 Border guards of Chop Detachment “Velykyi Bereznyi” detained the trespasser for illegal cross of the state border. Receiving information from Slovakian border guards about movement of unfamiliar person towards the Ukrainian state border the staff of State Border Guard Service immediately began searching actions. At first Ukrainian border guards found a hole in the fence and soon the service dog traced the violator. The man attempting to hide in the grass 800 m before the state border was apprehended. He did not have any identifying document. According to the man’s words he was a migrant from Chechnya and citizen of Russian Federation. So far, the detainee is delivered to subdivision for administrative protocol preparation and establishment of all circumstances.