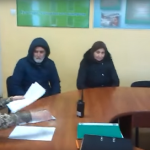 Border guards of Ukraine and Hungary conducted a special operation on detection and apprehension of illegal migrants in the frames of special measures taken on counteraction to the crimes at the state border.

According to information received by the border guards, the smugglers planned to transport some groups of persons through the border. Learning about possible movement of the migrants, the border guards detected two persons travelling towards Hungary 300 m before the border. The trespassers were aged persons and introduced themselves as the citizens of Afghanistan. During the interview border guards found out that smugglers delivered the woman and man to the border by car taking all their money, mobile phones and documents. Then, they took Afghanis deep into the forest. On Afghan’s demand to give them food and drink they started to shout at them and beat ordering to wait in the forest. Not waiting for the smugglers, migrants decided to move on their own. The border guards rendered them first medical aid, fed and provided with warm clothes. Emergency was called for the woman as she felt herself not well. After their state normalized the Afghanis were delivered to Detention Centre.

Meanwhile, Hungarian border guards due to information provided by the border guards of Mukachevo Detachment detained a citizen of Bangladesh and Sri Lanka, who were transported to Hungary. Protocols were drawn on administrative violations as to the detainees in accordance with the Article 204-1of Crime Code of Ukraine.