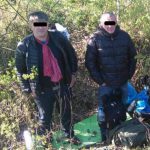 Two citizens of Georgia attempting to cross the state border of Ukraine to Poland beyond the check point were detained by the border guards of Lvov Detachment in Volyn. The men were stopped by the border guards on the bank of the river the Western Bug. The travelers had document regarding which it was established that they were the citizens of Georgia. They took a rubber boat for travelling, some clothes and food reserve for several days. All this pointsout  that they planned it beforehand. Detainees were delivered to Border Department for infringement circumstances clarification. Their further destiny will be defined by the court.