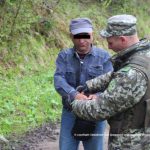 Border guards of BS “Smilnytsya” of Mostytskyi Detachment detained the violator moving towards Ukrainian-Polish border. The detainee introduced himself as the citizen of Georgia (DOB 1967) and had been residing in Ukraine for a long time. Some days ago he intended to get to the countries of European Union in illegal way and arrived to Lvov. He laid the route by himself and beforehand. Arriving to the border area he immediately attracted the attention of local residents, who informed the border guards on this point. The border guards detected him and detained. Protocol on administrative responsibility was drawn for illegal cross of the state border of Ukraine.