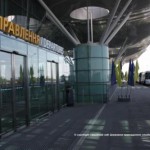 The violator with forged documents was found in the Boryspil Airport by the border guards of Separate Check Point “Kyiv”. During the measures on border control for the passengers of the transit flight “Dubai-Kiev-Geneva” the border guards revealed the forged passport of Indian citizen with replaced pages of constituent data, ad in the passport – there was false Schengen visa.

In the course of further filtration measures the border guards made certain that the owner of the documents actually was the citizen of Sri Lanka. The violator was not passed through the border. His return by fly back is planned to the United Arab Emirates.