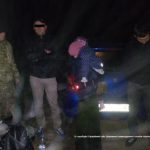 From April 20, 2016 the State Border Guard Service has started operation “Border-2016. It will actually be hold till the end of the year and focuses on counteraction to the criminal groupings being engaged in organization of the channels to transport illegal migrants, cigarette smuggling and other unlawful activity.

So far, there is an active phase of the operation. In the course of operative and preventive operations 286 violators of the state border were detained as well as 31 illegal migrants, and 847 potential illegal migrants were not passed to Ukraine. The operation is conducted upon the initiative of SBGS in cooperation with other law enforcement agencies, concerned ministries and departments. Thus, within the frames of this operation and in a result of cooperation the staff of SBGS and SSU apprehended a group of illegal migrants and their smuggler at the border. The car driven by 35-year-old citizen of Ukraine was stopped 700 m before the state border on Poland. There were a man, woman and 4-year-old child inside the car. Detainees intending to get to Poland and then to other countries of European Union, were the citizen of Turkey (27 y.o.) and his wife with daughter (citizens of Russian Federation, Chechnya). Then, it was established that the man possessed dual citizenship as national and foreign Russian passports were found in his stuff.