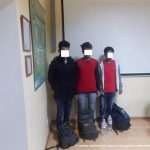 The border guards of Chop Detachment detected and detained three foreigners, guests from Bangladesh in one of Uzhgorod hotels in the course of information verification received from operative subdivisions. The men did not have any identifying documents. According to their words, it became known that they were the citizens of Bangladesh. They also reported about their intention to get to EU countries in illegal way being looking for better living conditions.

Now the detainees are delivered to the Temporary Detention of Chop Border Detachment. An administrative protocol was drawn up according to Article 204 Part 1 of Administrative Infringement Code of Ukraine “Illegal crossing or attempt of illegal crossing of the state border of Ukraine.” In addition, documents were prepared about the administrative breach of the Article 202 of AICU “Violation of border regime or regime in the check points through the state border of Ukraine” due to their stay in the controlled border area without identifying documents. Checking measures continue as well as establishment of possible persons involved in the breach. The Centre providing free secondary legal assistance in Transcarpathian region is all informed on this point.