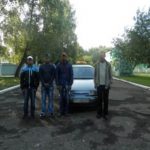 The next three citizens of Bangladesh intending to get to one of EU countries in illegal way were apprehended at night by the border guards of Mukachevo detachment. Acting in the frames of measures strengthening on counteraction to illegal migration the staff of State Border Guard Service stopped the car on the road transporting foreign citizens. After verification it was established that documents of the mentioned persons, natives of Southern Asia, were invalid. Besides, during interview the “travelers” confused in own constituent data, as well as confessed their trip to Europe aiming at better life conditions. Administrative documents are prepared regarding the car driver and detained citizens.