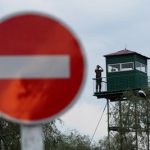 In a result of jointly conducted operation on violators’ interception, appearing in the border area, by Ukrainian and Hungarian border guards, 3 illegal migrants were apprehended. During the border detail’s patrolling in the area of Mukachevo Detachment 3 unknown persons were noticed from the observation tower. They did not stopped moving quickly towards Ukrainian-Hungarian border. Ukrainian border guards immediately started chasing for the violators and simultaneously informed Hungarian colleagues on this point, who, in its turn, organized the searches in this direction. Already less than in an hour of joint searches the violators were detained. Detained “travelers” were 3 citizens of Sri Lanka.