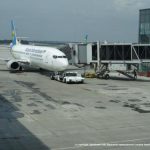 Border guards of Separate Check Point “Kyiv” detected a family from Iraq in the Boryspil Airport, who intended to get illegally to Great Britain and a citizen of Turkey with invalid passport of the Bulgarian citizen. In the course of documents check of the transit passengers arrived from Teheran, border guards checked the documents of three persons – a mother and two children. They submitted the passports belonging to citizens of Great Britain. However, inspector of Border Guard Service noticed immediately other persons on the document photo. It was established that the woman wished to use someone’s documents in order to get to a cherished EU country. The persons will be returned by a fly back to Teheran due to this violation.

And the citizen of Turkey attempted to fly to Vienna using invalid passport of the citizen of Bulgaria. He was revealed in the Boryspil airport by the border guards when registering passengers for the flight to Austria. He submitted the passport Bulgarian citizen of non-standard pattern. The violator was apprehended and after his identity, under the assistance of Turkey Embassy in Ukraine, case on an administrative violation was forwarded to the court of Boryspil town. The court instituted administrative proceeding against the violator, who was also fined for the sum of 1700 UA. Decision was made to return him compulsory to Turkey.