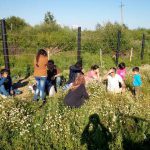 Ukrainian border guards detained illegal migrants intending to get through the protecting fence. Border guards of Mukachevo Detachment detained a group of illegal migrants in the area of BS “Luzhniki”: two women, three children and four men. They were discovered by regular soldiers. Group of persons attempted to damage protective fence and cross the border. The detainees did not have any documents and introduced themselves as the natives Afghanistan. They were delivered to Temporary Detention Centre. Persons are established, who assisted Afghanis to cross the state border of Ukraine.

As it was reported by the site “Strana”, border guards apprehended also the group of illegal migrants from Vietnam in Kharkov region, who were planning to get to Ukraine in illegal way. The violators were detained in the suburb of the village Kazachiya Lopan (Kharkov region).