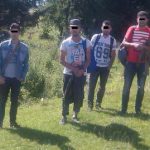 Border guards received information about the young men of Arab appearance, who in one of the villages of Turka district, Lviv region asked about the way to the border. Unknown persons offered one of the residents of border village cash reward for taking him to the border on Poland. The man “agreed” to this proposal of typical illegal migrants, asked to wait outside his house and meanwhile he called the border guards. Foreigners not waiting for their guide, went to the border on their own, however, in some minutes they were detained by a reaction group of Border Service Department. The detainees appeared to be four Algerians having Ukrainian temporary residence permits told the border guards that came to Ukraine legally and entered the first course of study in one of the universities of Kharkov. However, instead of getting education in Ukraine, they made their decision in another way – the illegal journey to Western Europe. Currently, Algerians are detained in administrative order, regarding the “students” the protocol on administrative offense are prepared under the Part 2 of Article 204-1 AICU “Illegal cross or attempt to cross the state border of Ukraine in illegal way”, committed by the group of persons. The decision on the case will be made by the court.