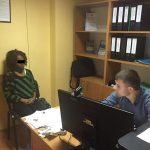 The border guards of Chop detachment detected a foreigner in the area of railway station of the check point “Chop”, who intended to get to the countries of European Union by forged passport. The woman travelled by train “Odessa-Uzhgorod”. She provided a foreign passport under the name of the citizen of France to the border detail performing verification of the passengers’ documents in the carriage. However, during inspection border guards discovered it to be false. In particular, a page with constituent data was replaced and document punch was home-made, as well as signs of SBGS on crossing the state border in the check point “Boryspil were forged. According to the woman’s words, she was a citizen of Congo. She was apprehended and delivered to Temporary detention centre of Chop Border Detachment to identify her personality and clarify the circumstances of infringement. Forged passport was confiscated and passed to the representatives of National Police in Transcarpathian region.