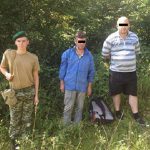 Border guards of Chop Detachment detained two illegal migrants from Georgia in the area of BS “Knyaginya”. The men were detected 400 meters before the line of state border, who were attempting to climb over the fence. Detainees had passports for travelling abroad. Then, it was established that mentioned persons arrived to Ukraine in legal way, however, and then they decided to get to the EU countries, choosing the mountainous area of Transcarapathia. Detainees were delivered to border subdivision to draw up administrative-procedural documents.