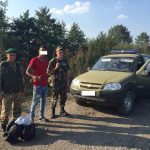 Border guards of BS “Grushiv” of Lviv Detachment detained a citizen of Morocco in the suburb of the village Nagachiv, Lviv region, due to information received from the local inhabitant. The foreigner is arrested for three days for establishing the circumstances of the infringement. Documents were prepared on administrative infringement and dent to the court.

Reaction group of BS “Kuchurgan” of Belgorod-Dnistrovskyi Detachment apprehended a citizen of Russia 300 m before the state border according to information provided by inspector of Border Guard Service. The man did not have any documents. The violator being detained in the direction of Russian-Ukrainian border area was detained and hold till the circumstances establishment.