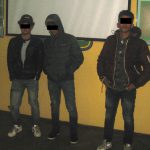 Border guards of Mukachevo Detachment apprehended three migrants from Yemen nearby Hungarian border. Border guards stopped the violators while processing received operative information the previous day. Unfamiliar persons moving towards the state border were revealed by means of the mobile night-vision device. Reaction group started to the place of detection immediately, which detained three men 20 m before the border line. Two detainees provided identification documents proving them to be the citizens of Yemen. One more detainees being also from Yemen had passport of the citizen of Ukraine. all detainees were delivered to BS “Luzhanka”. Circumstance of foreigners appearance in the area is established. Police staff was also informed about the detention of illegal migrants as well as discovering signs of infringements, which is stipulated by part 2 Article 332 of Crime Code of Ukraine.