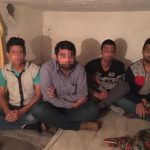 Transcarpathian SSU staff together with Police in one of the populated areas disclosed local residents planning to smuggle a group of illegal migrant over the state border of Ukraine to EU. The organizers of the channel received payment in advance from eight natives of southern-eastern Asia for their “services”. However, one of the malefactors regarded the sum insufficient and he closed the foreigners in the basement of his private house. The migrants were kept in inhuman conditions as hostages, and their relatives were threatened by the malefactor by physical reprisal if additional means would not be paid. He made video to confirm his unlawful activity. The SSU detectives and police freed the foreigners. Operative-investigation group works at the place. An issue is under solution with regard to criminal proceeding opening under the Article 147 and 332 of Crime Code of Ukraine.