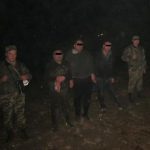 Border guards of Mostyskyi Detachment, Lviv region, in cooperation with Polish colleagues detained 3 citizens of Georgia, who tried to cross the state border of Ukraine in illegal way. Border guards of BS “Nyzhankovychi” protecting the part of the Ukrainian-Polish border within Sambir district, Lviv region, received information from the Polish border guards about the movement of unknown persons towards the border. Colleagues reported about seeing three men with rucksacks traveling in the direction of Poland and looking for a place of easier overcoming the engineering obstacles. Reaction group arrived to the place immediately and after a few minutes three men were found being without any documents. The detainees were Georgian citizens (DOB 1978, 1981 and 1987), who a day before legally arrived to Ukraine and in the search of future employment in Europe were aimed to move illegally over Ukrainian-Polish border. The Georgians made their route themselves and came to the border by public transport at night.

The men were detained in administrative order and their documents were prepared for consideration in the court as to bringing them to justice for the attempt to trespass the state border of Ukraine illegally.