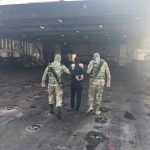 Illegal migrant from Syria was disclosed by the border guards of Odessa Detachment on the boat arrived to Chornomorsk from Turkey. Unfamiliar person intending to leave the boat was noticed by a border detail at night. Detainee introduced himself as the citizen of Syria. It was established that he got to Turkey in illegal way and then to the Ukrainian territory in the same way wishing to reach Great Britain. After migrant’s detention surveying groups of border guards conducted an examination of freight transportations presenting on this boat. However, no any other strange persons, articles or materials had been found.