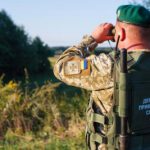 Channel of illegal migrants transportation through the state border was disclosed within the frames of joint border operation performance “Border-2016” by Ukrainian and Polish border guards. In the course of received information processing by the border guards of BS “Rava-Ruska”, Lviv Detachment, stopped a minibus close to the border. The car was driven by Ukrainian citizen, there was also a native of Turkey inside the car. In order to prevent any possible violations of the state line, the reaction group immediately checked the adjacent locality. Unfamiliar person was moving quickly towards the border on Poland. Ukrainian border guard informed Polish colleagues at once. Soon, the law enforcement agents detained the citizen of Turkey on its territory.

So far, operative and investigation actions are performed with regard to the participation of the Ukrainian and Turkish in the possible crime commitment under Part 1 Article 332 of CCU. According to the previous data, it was established that the citizen of Turkey traveled by minibus with Ukrainian, he has already resided in Odessa for some years, and probably he is involved in organization of illegal transportation of his country fellows over the border for gratuity to the EU countries.