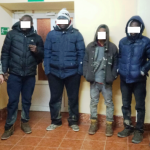 The staff of SBGS in cooperation with National Police apprehended four illegal migrants. Unfamiliar persons appeared in the border area of Berehovo region. Information about their action was in due time received by Operative Department of Border Guard service. National Police together with the border guards of Mukachevo Detachment started for searching the violators. In a result of joint action four men without documents, of 19, 20, 26 and 30 years old, were detected and detained by law enforcers. According to the foreigners’ words looking for the way to European countries, it was known that two of them were the citizens of Sierra Leone, one from – Guinea, and the other from Cameroon.

In the present moment administrative protocols were prepared as to the foreigners, they are delivered to Temporary Holding Centre of Mukachevo Border Detachment. Their further destiny will be determined by the court. Also, all circumstances of their illegal trip are established.