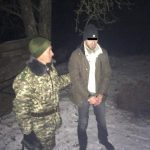 Border guards of Mostytskyi Detachment apprehended a citizen of Russia crossing illegally polish-Ukrainian border. Polish colleagues informed about the possible violation at the border on Poland in the area of BS “Smilnytsya”. Reaction group found the place of illegal border crossing and started chasing immediately by the footsteps of unknown person. District inspectors of Border Service were also attracted to the searching operation. Soon, one of the inspectors informed about detention of a person without documents in the distance of 1 km before the border. In the course of verification it was learned that detainee, 1986 YOB, was the citizen of RF, of Chechen origin, having certificate for temporary residence in Germany. The men told that he lived in the Refugee Camp for a certain period, and then decided to return back home in illegal way, wishing to help his wife to get to the EU countries. The citizen was detained in administrative order. Further on, he will be passed to Polish side within the frames of Readmission Agreement implementation.

One more violator was detained by the staff of State Border Guard Service in Kharkiv. Reaction group of BS “Pletenivka” apprehended him at once after alarm device operated. The violator got beyond the check point to Russia in the evening. He was the citizen of Uzbekistan. Administrative protocol was drawn as to the detainee for attempt to cross the state border; the case was delivered to the court.